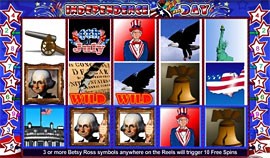 American slots are a very popular type of slot gaming machine. They have simple playing rules and provide the players with remarkable prizes. Besides American slots, the regional variety of slots is presented by the following slot types:

In the USA the availability of slots is regulated on a high level by state governments. Nevada is a unique state where there are no serious restrictions against slots. In New Jersey it is possible to place and play slots in Atlantic City (New Jersey). Some states allow slots only on licensed permanent barges or riverboats. Among such states there are Iowa, Illinois, Mississippi, Indiana and Missouri.

Native American casinos which are located in reservations did not have a right to have slot machines. Such situation was till the obtainment of permission by the state where the tribal casino was located.

There are two types of American slots: Class II and III. The classification may vary from one state to another.

Class II has other names "Video lottery terminal", "VLT". The slot machines of class II are linked to a centralized computing system. The system determines the results of each wager. The slots of class II have special characteristics.

The slots of class III are the traditional slots. Sometimes they are called "Vegas-Style slots". Such slot machines worked independently and they are not linked to a centralized computing system. The chances of winning are the same all the time. More often it is possible to find the slots of class III in Nevada and Atlantic City. In slots of class III the wins are presented automatically. As compared with Class II, the games of this class are independent. Also, the distinctive characteristic of class III is that the gamblers play against the house and not against each other.