The slot gaming machines in Australia are also named "poker machines" and "pokies". They are a little bit difficult for gambling but the high level of slot payoutpercentage make them attractive for the players.

Australian pokies are popular among the online casino gamblers and also such slots can be found in land-based casinos, pubs and clubs. It will be never difficult to find slots for gambling in Australia. The density of slot machines is the highest in Australia (as compared to other countries).

The government regulation in Australia is not as strict as in the USA, for example. The New South Wales was the first Australian state which legalized gambling in 1956. In State of Queensland the gambling houses must pay 90% of payback rate and pubs with clubs should pay 85%. Western Australia is the only place where some forms of gaming machines are allowed to play in Burswood casino. Other gaming machines can't be used anywhere. 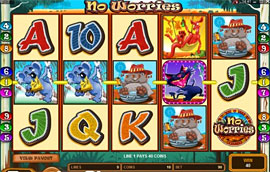 Australian slots' rules are more complicated than then American slots. Actually on the whole described slots are not difficult for playing, the gamblers just need to study attentively the pay table.

Pokies allow the gamblers to play multiple lines (up to 50) and multiple ways (up to 243). Playing with multiple coins increases the player's winnings by the number of coins which were bet on the game. The higher complexity level - the higher chances to win.

The Australian slots are considered to be more profitable as comparatively with other gambling games. About 80 - 90 % of money is returned to the slot players. The amount is computed when the average wagered amount is divided among all the gamblers.