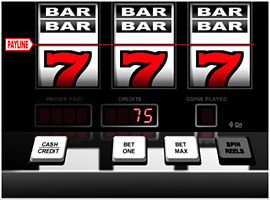 Random numbers are sequences of digits that are spotted in random order. It is impossible to predict the individual digit knowing other digits because the digits are randomly ordered.

There is an interesting question: are the random numbers truthfully random? Actually, the numbers which are produced by RNG in a slot gaming machine are not truly random. The obtained numbers are the outcome of a mathematical process. It is possible to calculate the next number knowing the value and the formula which is used by the random number generator.

Nowadays all kinds of slot machines use a program Random Number Generator. The random number generators work uninterruptedly. The slot machines constantly put out the symbol combinations which the slot players can see on the slot machine. The combinations of numbers are produced few times in a second. If the slot player wants to win a jackpot, he needs to push the button exactly at the moment when the random number generator produces the winning number jackpot combination. But the cached of jackpot are really rare.

Slot history says that for the first time the RNG appeared as a part of slot machines in the 1970's. But they did not change the industry of slot gambling until 1980's. Random number generators propose options which were not available during the period of mechanical slot machines.