British Slots - Details of the Game

In the United Kingdom of Great Britain the supply of slot gaming machines is occurred according to the Gambling Act 2005.

The Gambling commission was created as a result of the Gambling act 2005. The full powers it obtained in 2007. The created Commission had to control and top regulate bingo, casinos, betting, lotteries and slot machines. The commission is not the departmental public body. It is placed under the control of the Department for Culture, Media and Sport. The gambling commission provides the gambling operators with licenses. 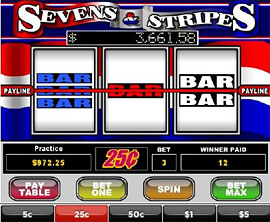 The Gambling commission elaborated the categorization of games. And the slot gaming machines are divided in 4 categories. The first three categories attract our attention - A, B, C.

According to the materials from June 2009, the maximum states and maximum prize of games from the category A could be unlimited. Actually there are no legal games of Category A in the United Kingdom. Such games had to be introduced in "Super Casinos". Manchester was chosen as a location. But there was a cancellation of the development when Gordon Brown became the Prime Minister of UK.

The games of category B have a division into categories. The differences between them are in the prizes and stake. The slot games are grounded on random number generator.

The slot games of a category C is probably the most spread category of slots. These slots are well- known as fruit machines. They are also called "one-armed bandits" and "Amusement with prizes" - AWP. It is possible to find the fruit machines in pubs, arcades, and clubs. Usually such machines have 3 slots reels but also the players can meet slots with 4 or 5 reels. The British slots of this category often have many other features which can give the players more opportunities to win. While gambling at the fruit machine the players can hold 1 or few reels before spinning. The maximum payout differs from game to game depending on the type of machine and its location.