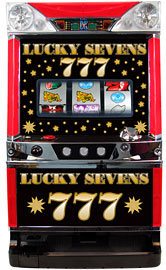 In the middle of the 1920's the first skill stops buttons emerged on mechanical slot machines. These stops were on the machines produced by Mills Novelty Co. The reel-stop arms were modified. New device allowed to be discharged from the framework (timing) earlier than usually. It was just necessary to press the buttons on the front element of the machine. These buttons were situated between each reel.

In 1970's some Zacharias Anthony's slots machines were equipped with skill stops buttons. From here and now it became possible to stop each reel at any time the slot players wanted. Such innovation was added to approximately fifty Bally slots gaming machines. It was very beginning of the area of skill stop buttons. There was a need to put additional weight to the mechanical timers. The typical machine stopped in ten seconds and it was necessary to extend the time of automatic stopping of the slots reels.

Skill stop machine is an authentic Japanese slot gaming machine. It looks like a traditional type of slots machines. But they are much smaller. They are very comfortable for a home use. Instead of traditional pull arm they have 3 buttons. A new brand skill stop machine can cost 3500$.

The skill stop machines can be easily placed at home or at any recreation room. It is possible because of their size, original casino feel, low cost. Skill stop machines are a perfect opportunity for entertaining. They will be for sure appreciated by family and friends.

A Piece of Advice

If someone decided to purchase a skill stop machine he or she needs to verify the presence of warranty. All internal parts of the machine should be lubricated and cleaned. All the lights should be in a good order.