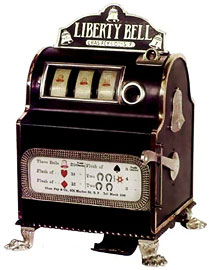 Usually the beginning of the slots history is assotiated with the name of Charles Fey. He is known as a creator of slot machine. But prior to his invention, some other kinds of coin operated games of chance were known. They were presented in the form of poker machines. While gambling on such poker machine the players could win free drinks or cigars when they got a line of winning combination.

Charles Fey is a person who created the slot machine, the analog of which the gamblers can meet in our days. It was a machine with three reels which contained five symbols. There are few versions about the exact day of slot machine creation. It is possible to meet 1887, 1894, 1895 years of its creation. Many people believe that it was created exactly in 1895. But it is known (from the book under the title Slot Machine Mania) that on the 15th of April 1887 there was an article in the San Francisco chronicle about the Fey's demonstration of his Liberty Bell slot.

The first generation of slot machines has the name New Nickel Machines. Such machines were presented in 1887. The machines had a great success.

The Mills Novelty Company, where Charles Fey started to work, manufactured the Mills Liberty Bell, the Operator Bell. Also the Silent Bell was created. It happened in 1915. The Silent bell was a light version of such gaming slot machines. They are called "silent" as they worked more quiet than the previous versions of slot machines. With time different kinds of bonuses were added to the slot machines (for example, Double Jackpot)

Today there are more kinds of bonuses added tot he machine. Most of the top Australian online casinos offer a range of promotions to make it more appealing to play the games. Some offer to match your first deposit or give cash back on subsequent deposits. Many casino sites also offer special promotions on some of the most popular games.

New period in slot history started in the seventies. The companies began to use random number generator and microchips. These devices had to define the reels' spin. The machines had not need an "arm" no more. Before eighties there were essentially microchip-powered slots in the casinos.

Beginning of the 20th Century

The first decade of the 20th century is a period of the Anti-Gambling movement. It started in San Francisco. According to this movement slots became illegal. And during 2 decades slots were underground.

Technological developments brought to the slots their ancient popularity. The Nevada Electronics presented new Twenty-One Machines in 1964. New machines had special chairs for a couple of slot players. The machines had different electronic devices which made slot machine cheats impossible.

After the electronic age the age of video slots came. The first video slot was created in 1975 by the Fortune Coin Company. But unfortunately video slot machines were not popular. The players did not believe the machines without wheels. But with time, in 1978 the IGT (International game Technology) bought the Fortune Coin Company and started improving their slots. And soon the video slots gained popularity among the gamblers.

New inventions characterize the new slot generation. For example, IGT introduced tickets-In and tickets-out. It was a fresh method of payment.