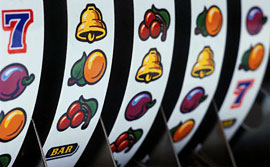 Slots reels are the part and parcel of every slot gaming machine. Both electronic and mechanical slots have reels. The number of slots reels can vary. The reels have symbols of different combinations. And after the spinning of the reels the players obtain random symbol combinations. Usually all the same symbols provide the players with winnings.

The first mechanical slot machine was created by Charles Fey. It had three reels with symbols. Three reels give 1000 combinations with a total possible payout 750 coins. With time the number of reels grew. 10 symbols were added and 8000 possible combination could be obtained. In 1970 the number of symbols increased to twenty-two. It was the maximum possible amount. The number of possible combinations became 10648. The inventors had to add more reels to place more symbols but unfortunately such machines (with more reels) were not of success among the players.

The patent for using random number generator was received by Inge Telnaes in 1984. Soon the IGT purchased the Telnaes patent. The virtual reel can have from 32 to 256 symbols. Such reels can have a virtual stop.

In three reel slots machines the reels are numbered from 1 to 3. The reels spin or move after the spinning of the button or pulling the lever. The slots with three reels and one payline are the classic slots and the most common kind of mechanical slot. The random number generator led to the creation of the virtual reel.

The five reel slots machines have the reels numbered from 1 to 5. The winning combination depends upon symbols which fell down.

So, there are slots with different number of reels. Also there are regional slot variations.